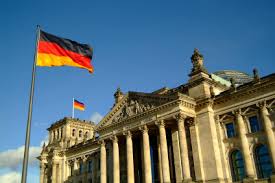 Growing Older: Germany Needs Reforms (IMF).Germany, a champion of structural reform prescriptions within the European Union, needs a large dose of the same medicine at home, too. Beyond public investment in transport and telecommunications, and more competition in services, dealing with an aging population needs urgent attention. With the right policies, Germany can bring more people into the workforce—and for longer—to counter the demographic trend, argues a recent study accompanying the regular health check of the German economy by the International Monetary Fund.

The problem is widespread across advanced countries: with the baby boomers hitting retirement age and low fertility rates, fewer workers have to sustain a growing proportion of retirees.

In Germany, despite a steady inflow of migrants, the number of workers is expected to decline at an accelerating pace after 2020. With less people working, the country’s potential output growth—the rate at which the amount of goods and services the country can produce at normal capacity increases—is expected to fall, putting the long-term sustainability of the social security system and public finances at risk (Chart 1).

[expander_maker more=”Διαβάστε περισσότερα” less=”Διαβάστε λιγότερα”]While there is little room to adjust pension benefits or social security contributions, Germany can introduce measures to make it easier for more people to work, and encourage others to work more. According to our analysis, the country would benefit from doing more in the following areas.

First, Germany should employ more women and for longer hours. Although a large portion of women is in the labor force (73 percent in 2014), many do not work full-time (the average is 30.5 hours a week, which is 9 hours less than men). While this may reflect to some extent culture and personal preferences, Germany’s tax system discourages full-time employment by the household’s second earner (usually a woman). The scarcity of affordable, full-time child care options and after-school programs also makes it difficult to reconcile parenting and full-time work.

Addressing these constraints would allow more women to switch to full-time employment. More women working more hours would help fill the gaps left by the growing number of pensioners. Our calculations show that if Germany spent a quarter of a percentage point more of its GDP on child care services (lifting the total spending to 0.75 percent of GDP, the OECD average), real GDP would be 2.5 percent higher in the long run, with positive effects on short-term growth as well (Chart 2, first panel).

Second, sooner or later, Germany has to take the politically unpopular step of lifting the retirement age further. Currently, Germans stop working at the age of 62.7 on average, which is low in international comparison.  The goal should therefore be to extend working lives, by increasing the statutory retirement age (the age at which workers can draw a government pension without penalty) and removing current disincentives to continue working after that age. Adding one extra work year on average would result in 1.75 percent higher real GDP in the long run, according to our calculations (Chart 2, second panel). The corresponding savings for the social security system could be used to lower the already very high contribution rates and/or avoid cuts in benefits, leaving a bit more pay in workers’ pockets.

Third, even before the latest surge in refugees, Germany was attracting a growing number of immigrants. Past experience shows that, as in other countries, immigrants have been integrated in the job market only slowly—with higher unemployment and lower wages than German workers. On average, wage gaps between natives and immigrants have been estimated at 30 percent upon entry, narrowing but not fully disappearing over a span of 25 years. Stepping up investment in training, and adapting training to the needs of immigrants, could help ensure that immigrants have the skills that German employers seek, lifting long-term employment and GDP (Chart 2, third panel). 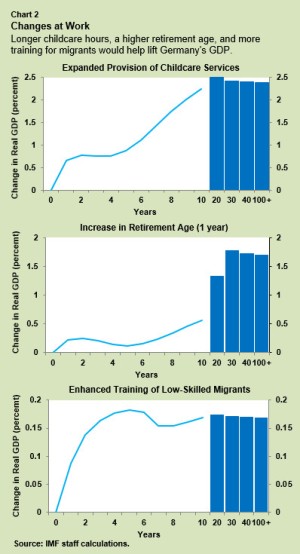 Earlier IMF reports and economic health checks have repeatedly suggested further structural measures that the government should carry out to stimulate growth over the medium-term. These include for example government investment in transport and other public infrastructure, improving crumbling roads and ailing school buildings. In 2015, net public investment in these areas was negative, which means that the country failed to keep up with the depreciation of the public capital.

A recently released plan showing sizable increases in transport infrastructure investment is promising, but budget allocations are only to be decided year-by-year and so are highly uncertain. Germany is also lagging many peers when it comes to fast internet broadband connections, and much is left to do to boost competition in some regulated professions and in the postal and railway sectors.