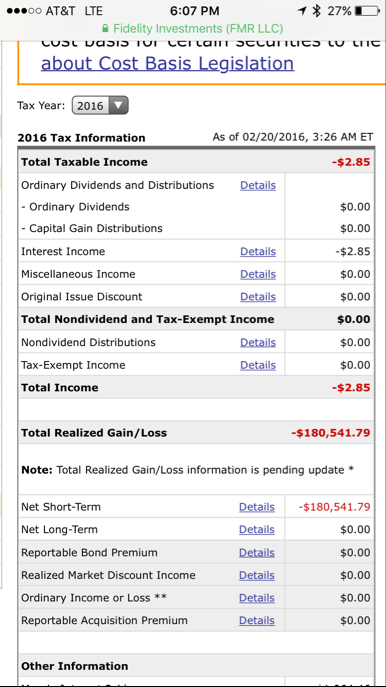 “Suicidal” Trader Loses Everything, Launches Online Begging Site.
Back in November, when Martin Shkreli had just unleashed his ill-fated manipulation of Kalobios stock, one trader got crushed. As we reported then, one “E-trader”, Joe Campbell, decided to go $35,000 short KBIO the night before the massive ramp in the stock following the Shkreli press release and ended up owing ETFC “a wonderful $106K” margin call.

His response was to launch a GoFundMe website opening up his plight to generous online donors. Surprisingly, many appeared on  short notice, providing several thousand in online donations to help him fill his margin hole.

Now another trader finds himself in a comparable predicament, this time it is 24 year old Matt Reed, who yesterday suffered a massive loss after he decided to bet it all on FitBit calls (on margin) and lost everything, as the following Fidelity screengrab from his P&L indicates: I’m down 200k aka basically everything and pretty much suicidal right now
kept buying on margins as it went up. Held too long as it went down
started small then after it did well I took figured why not put more in. Got behind kept trying to break even. Never did
Put just about what I had left in 15.5 calls here…my life is totally fucked right no; what I have left is fit 15.5 calls which will most likely be worthless on the open tomorrow
wasn’t hoping for a huge return just quick return to get lost money back but yes I learned the hard way about how they’re toxic
I went wrong by using margins and I don’t think I’ll be back in it to bounce back
I was doing great which is how I got onto margin. Got greedy but then January came and it got bad fast
May seem like a joke but I’m fucked
Last hope was calls so I doubt they’ll be worth anything by Friday
Worked 4 jobs the past few year to save up. Sucks seeing my life savings disappear in a little over a month
Thinking what I was at in December vs now just makes me sick, and I’m still working multiple jobs. As you can see this isn’t my calling
it was purely my fault for being too risky with margins and trying to quick flip during a bad month
This was a hard lesson to learn but must be a sign that I should never put my money into the stocks
I’d say learning about margins was the worst possible thing to ever happen to me. If I didn’t then I’d be up 50k right now
The bottom line:

I’ve had a realized loss of 180k this year.
no do over for me…I’m outta the stocks. Clearly not for me
So what did he do? Same thing as Campbell: a last ditch effort of generating some cash through online begging, in this case another GoFundMe website titled appropriately enough “Stock ruined my life.” This is what he said:

Hello everyone this is a story a lot of you may have already heard about. I’ve recently lost all my money in the stock market. I had a good ride so I put everything I had in it. After a bad 2016 start I’ve ended up losing everything I put in. I’m trying to get some money back because what I had lost was money for a house down payment and a ring for my girlfriend. Unfortunately that’s all gone now.
As he himself admits, while Campbell may have had a novelty first mover advantage, Reed is going to have a steep uphill climb if this is indeed his final option:

Hard to take someone setting up a gofundme seriously…hard for me to accept all this though
I’ve been praying yelling crying. Every emotion but happiness has been felt the past month or so
Good luck. For now, however, online begging does not seem to be the best recourse for all those who chased momentum in a rigged market, and found themselves on the receiving end of a massive margin call. As of this moment, nobody has donated a single penny to the 24 year old now former trader.[/expander_maker]