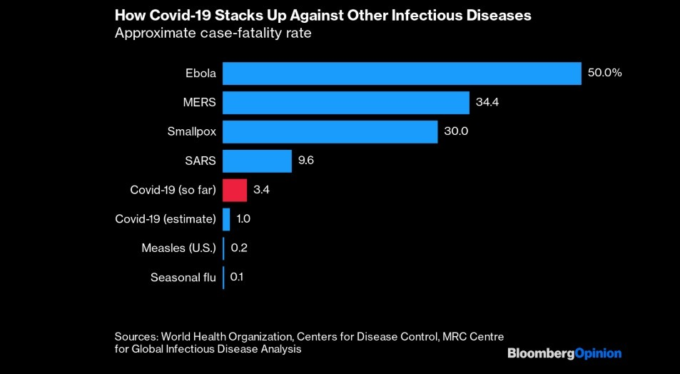 By Jason Gale and John Lauerman

The newly identified virus that emerged late last year in the central Chinese city of Wuhan has quickly spread worldwide, with the number of infections topping 100,000. The contagiousness of the so-called coronavirus, which causes a lung illness dubbed Covid-19, has health experts worried it could become a pandemic to rival some of the most devastating in recent decades. Meanwhile, the outbreak is causing turmoil in the global economy and financial markets.

(This story updates with new infection toll and fresh details on what authorities are doing in section 10 and economic impact in section 12.)

1. What makes this virus so worrying?

It has been described as “insidious” because many infected people are well enough to go about their daily business, unwittingly spreading it to others. As of March 3, the fatality rate was about 3.4% based on globally reported cases, the World Health Organization said. Such numbers are unreliable in the early stages of an outbreak, however. Some disease-modeling experts project as many as hundreds of thousands of people are actually infected, most of whom don’t even know they have it. One study published Feb. 10 estimated a mortality rate of 1% once all cases, including those with no or only mild symptoms, are counted.

2. How does this compare with other outbreaks?

A related coronavirus killed 9.5% of patients in the 2002-2003 epidemic of severe acute respiratory syndrome, or SARS, and another known as MERS-CoV has led to death in 34% of the 2,499 cases recorded since 2012. In those outbreaks, however, the viruses didn’t transmit from one person to another as efficiently as this new one appears to do. Certainly, they didn’t spread as widely as fast. In the worst pandemic in recent history, an estimated 50 million people died in the 1918 influenza pandemic that had a case-fatality ratio of about 2% but infected as much as a third of the world’s population.

Symptoms begin to appear on average five to six days after infection. Infections appear to cause a mild illness lasting about two weeks in children, adolescents and younger adults in most cases, and potentially more severe disease lasting three to six weeks in older people. Frequently reported early signs are fever, dry cough, tiredness and sputum production. In severe cases, studies suggest the virus invades cells in the lower respiratory tract, causing difficulty breathing and the inflammation and congestion associated with pneumonia. In an early study, more than a quarter of hospitalized patients developed a complication known as acute respiratory distress syndrome.

4. Who’s most at risk for complications?

It appears to be the elderly and those with other serious health issues. Many of the fatalities have been in patients with underlying illnesses such as cardiovascular disease. A Chinese study of 72,000 cases found most deaths occurred in patients over 60 years old. Of all confirmed cases, 81% were mild, 14% were severe and 4.7% critical. The last pandemic, an outbreak of a new strain of H1N1 flu in 2009, infected an estimated 61 million people in the U.S. alone and may have killed as many as 575,000 people worldwide in the first year it circulated — with about 80% of them younger than 65, according to the U.S. Centers for Disease Control and Prevention

5. How do people contract it?

By coming into contact with virus-containing droplets that are emitted when an infected person coughs or sneezes, according to the WHO’s first comprehensive report on Covid-19. These droplets can be transferred directly to someone else in close proximity or via hands and surfaces. How long it survives on surfaces is still not known, but preliminary studies suggest coronaviruses may remain infectious from a few hours to a few days. Simple disinfectants kill it. There’s a theoretical risk the virus can spread through feces or fartherthrough the air in tiny particles known as aerosols. People who are still incubating the virus and show no symptoms may spread it. Health authorities are concerned about what’s known as community spread, where the virus begins circulating freely among people outside of known contacts with other patients.

6. How contagious is it?

Epidemiologists try to gauge contagiousness by estimating the number of additional people a person who is infected is likely to infect. That measurement, called a basic reproduction number or r0 (pronounced “r naught”), is one indicator of how difficult an epidemic is to control. A study of an outbreak aboard a cruise ship estimated that the r0 for Covid-19 was 2.28 during the early stages. That would make it more infectious than seasonal flu, which has an r0 of about 1.3 and killed an estimated 61,000 people in the U.S. in the 2017-18 season.

6. Could warming weather help combat it?

The viruses responsible for influenza spread more easily during cold weather because they survive longer in cold, dry air. But there’s no evidence to suggest the Covid-19 virus would be affected by weather.

Coronaviruses are named for their crown-like shape. There’s a large family of them, responsible for diseases that range in severity from the common cold to MERS. Some transmit easily from person to person, while others do not. The WHO says that new strains emerge periodically around the globe, and several known versions are circulating in animals and haven’t infected humans.