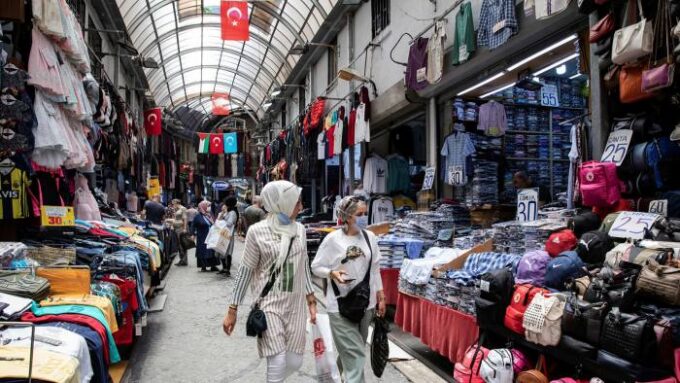 Turkey’s economy is in danger of contracting this year after the coronavirus pandemic hit economic activity in the second quarter, the country’s finance minister has said, acknowledging that his previous forecast of a 5 per cent expansion was no longer within reach.

Berat Albayrak told a Turkish television channel that this year the country’s economy could shrink by up to 2 per cent, or expand by a maximum of 1 per cent. But estimates from international institutions for an even sharper contraction were baseless, he said in the interview late on Wednesday evening.

The IMF forecasts that the Turkish economy will contract by 5 per cent in 2020, while the World Bank’s baseline scenario is for a 3.8 per cent fall.

Mr Albayrak said the sharp decline in the lira had made Turkey more competitive in attracting tourists and selling goods overseas, adding that he was not worried about the exchange rate. The currency has lost about a fifth of its value against the dollar this year.

Goldman Sachs estimates that Turkey spent about $65bn of its central bank foreign currency reserves in June and July on efforts to keep the currency stable, but since the start of August it appears to have abandoned the attempt.

The central bank has rebuffed calls to raise its benchmark interest rate to stem the lira’s losses. It will confront the dilemma when it holds its next monetary policy committee meeting, in a week’s time.

“There is a very important paradigm shift now with a competitive
exchange rate, low interest rates and most significantly, a
transformation that is based on production, not imports,” said Mr
Albayrak, who is Mr Erdogan’s son-in-law.

In a move which some analysts said was intended to buffer the lira, the Turkish central bank has recently hiked banks’ funding costs.

Late last week it scrapped its usual one-week repo operation priced at the policy rate of 8.25 per cent. On Thursday the bank instead held a one-month repo auction at which lenders set the rate through their bids at 271 basis points above 8.25 per cent according to Bloomberg.

“The [central] bank is trying to rein in lending . . . without hiking the base
rate,” Timothy Ash, an analyst at BlueBay Asset Management, wrote in a
research note.

The supply of credit has risen sharply since the government compelled banks to increase lending. Regulators this week also took other steps to cool lending, including reducing the loan-to-asset ratio for banks.

But letting the lira weaken “is essentially a muddle-through scenario”, Mr Ash said: “Clearly the central bank does not want the ignominy of being forced to hike the base rate [and] it’s not even clear they would get approval from the president for such a move . . . unless the lira is in freefall.”

Mr Albayrak rebuffed suggestions that Turkey needed a higher interest rate to support portfolio inflows, arguing that net flows have been negative for the past two years. Foreign investors have sold about $12bn of Turkish assets over the past year, according to Bloomberg.

“The exchange rate will rise today, fall tomorrow . . . What is important is that Turkey manages the volatility,” Mr Albayrak said.

He blamed “crisis lobbies” for portraying the currency as under siege and said that the lira’s decline would have only a limited impact on inflation, which is running at an annual rate of about 12 per cent.

Turkey’s economy needs to become more independent in order to cope with divergences with the country’s traditional allies over foreign policy, Mr Albayrak said, adding that overseas military excursions had put pressure on the public finances.

Tax revenue fell to zero for four months this year because of coronavirus, and Turkey is likely to record a budget deficit of about 5 per cent of GDP this year, he said. But he reiterated that Turkey would not seek assistance from the IMF.