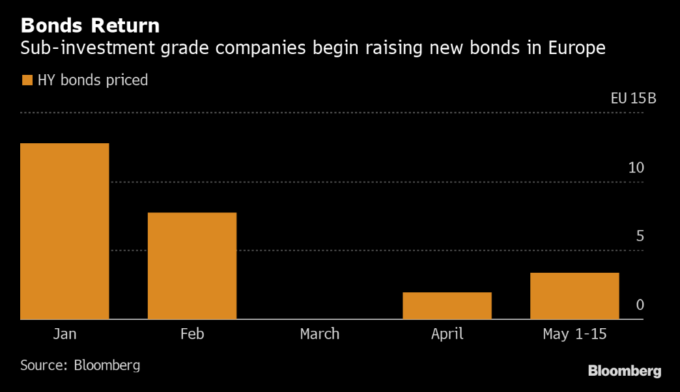 0
0
(Bloomberg) —
If there’s one lesson from the great financial crisis that applies to the current market turmoil, Todd Rothman argues, it’s this: take the money when it’s there.The managing director in JPMorgan & Chase’s high yield and leveraged loan capital markets team in London believes that with the future so uncertain, now is a good time for Europe’s high-yield borrowers to raise cash.

“Can the market get a little bit better from here?” he said in a phone interview. “Sure it can, but the risk is asymmetric right now in terms of things turning and getting much wider quickly.”

Some clearly agree. Appetite for refinancing the debt from European diagnostics firm Synlab Bondco Plc was so strong this week that the company doubled its bond issue.

Meanwhile demand for American IT firm BMC Software Inc.’s euro notes also exceeded the amount it planned to raise, according to people familiar with the matter.

Even theme park operator Merlin Entertainments, which has shut most of its 130 attractions, increased its offering and priced it at the lower end of initial guidance.

As countries around the world slowly reopen their economies and as support from central banks ramps up, Europe’s high-yield bond market has begun to function again after shutting in February.

By waiting for better conditions, companies run the risk that a deluge of weak second-quarter results or a resurgence of infections could depress investors’ appetite again.

In a change from just a few weeks ago when arrangers were only advising companies with urgent financing needs to tap the market, investors have seen major cash inflows. On the back of this companies are raising funds for liquidity, to refinance existing debt, and also for acquisitions as in the case of BMC.

“The market is open,” said Diarmuid Toomey, co-head of EMEA leveraged capital markets syndicate at Deutsche Bank. “There have been encouraging developments, with recent issues well subscribed and the buyside are telling us they are keen to put money to work.”

Investors are, however, still focused on quality and want to see more lender-friendly terms that not all borrowers may agree to. Fallen angels and investment grade bonds trading at depressed levels are also offering buyers alternatives.

Tatjana Greil Castro, a portfolio manager at Muzinich & Co. Ltd., sympathizes with the argument that conditions could easily deteriorate in future. But, she cautions, buyers may still prove picky.

“Do we really need to jump into the market now? Investors won’t buy whatever lands in front of them. They have a lot of choice,” she said.

Still, if demand remains healthy for now, arrangers may get the chance to sell down some of the M&A financings worth more than $13 billion that are waiting to come to market. Those deals include the private equity buyout of Thyssenkrupp AG’s elevator unit, Europe’s largest in a decade.