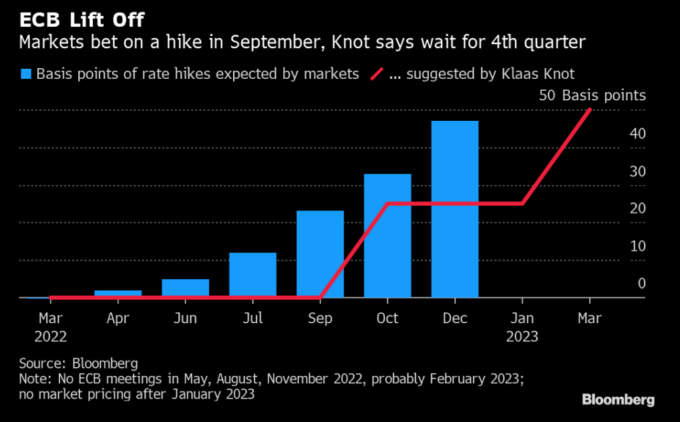 (Bloomberg) — A growing number of European Central Bank policy makers are losing faith in the institution’s current inflation forecasting, emboldening their shift toward hiking interest rates later this year, according to officials with knowledge of the matter.

While Chief Economist Philip Lane robustly defends the ECB’s projections and insists his staff’s modeling is reliable and state-of-the-art, several governors are cautioning against depending too much on them in a quickly changing, uncertain environment where the recent run of price increases has persistently confounded expectations.

Such doubts on the forecasting process emerged in multiple conversations with officials on the discussions behind last week’s surprisingly hawkish shift unveiled by President Christine Lagarde. They spoke on condition of anonymity because ECB deliberations are private.

The euro extended gains, trading up 0.3% at around $1.1445. Bund futures trimmed an advance in thin trading after the European session.

Lagarde’s pivot, taken against the backdrop of intensifying global tightening, has set the scene for a more hawkish decision in March, when policy makers may consider how quickly to stop bond purchases.

New forecasts will take prominence at that meeting, with the ECB’s last set of projections from Dec. 16 obsolete after another surge in energy and two record inflation readings since then, including a 5.1% reading in January. The last outlook was for an overall average of 3.2% of this year.

Lagarde said Monday those forecasts will help the Governing Council to “better appraise the implications” of current inflation readings on the medium-term outlook.

A foretaste of the size of the likely upgrade for the path of consumer prices may emerge on Thursday as the European Commission issues new projections. Draft forecasts seen by Bloomberg show consumer prices will advance by an average 1.7% in 2023 after surging 3.5% in 2022.

As chief economist, Lane is the Executive Board member responsible for the preparation and presentation of the ECB’s forecasts. His role also entails proposing any course of action at Governing Council decisions.

Doubts on the ECB’s modeling capabilities form one line of attack on his relatively dovish view that policy makers shouldn’t flinch on inflation that isn’t about to spiral out of control, officials say, observing that his position is gaining less and less traction among colleagues.

Instead, officials cite growing concern among Governing Council members, well beyond the typical hawks such as the Germans and the Dutch, that prices won’t undershoot the 2% target next year predicted in existing staff forecasts, and that such projections might prove an unreliable tool in a rapidly changing environment.

“Our base case is that the ECB signals a hike will come at year end, perhaps reinforced by plans to taper asset purchases a little faster. There’s a danger, albeit a small one, that doves on the Council cave into pressure from the hawks after taking stock of the inflation numbers and how financial markets have priced in aggressive hiking cycles in the U.S. and the U.K.”

Lane has insisted that it takes a model to beat a model, a hint that any critics aren’t offering constructive alternatives. He does also acknowledge an evolving economic landscape where unemployment is falling faster than anticipated and inflation expectations are stabilizing.

The Harvard-educated chief economist, seen by many observers as a torch-bearer of continuity for the stimulus-focused policy of former ECB President Mario Draghi, still reckons the ECB needs more time to form a policy judgment, with a potential conflict in Ukraine and its impact on energy among factors to watch.

His own policy prescription, rather than the aggressive interest-rate increases now predicted for later this year by economists at banks including Goldman Sachs Group Inc. and also anticipated by investors, would favor more gradual “normalization.”

That’s a view that Bank of Spain Governor Pablo Hernandez de Cos shared on Wednesday, while Bank of France Governor Francois Villeroy de Galhau on Tuesday said financial markets may have overreacted to Lagarde’s pivot, a suggestion that they have priced in too much tightening.

Lagarde herself talked of a “gradual” adjustment on Monday. Regarding the forecasts, she insisted last week that she has “full confidence” in staff making “sensible, reasonable, rational assumptions.” At the same time, she stressed that policy makers aren’t tied to projections and that “there is an element of discretionary judgment” in their decisions.

ECB Executive Board member Isabel Schnabel echoed Lagarde’s view in a post during a Twitter discussion on Wednesday. 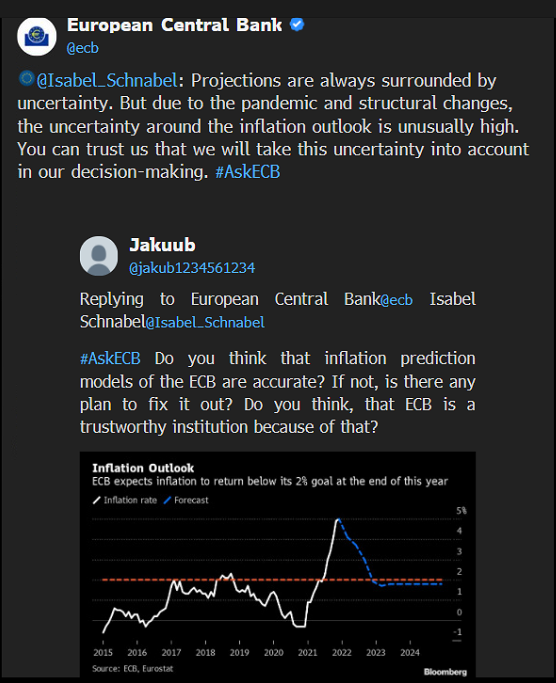 In a reaction to the concerns of Governing Council members about the forecasting process reported in this story, the ECB provided a statement via a spokesperson.

“The ECB’s/Eurosystem’s macroeconomic projections are conducted and owned by the ECB and by the Eurosystem staff. These provide a key input into Governing Council meetings, where decision-makers assess the outlook for the economy and inflation and formulate their own views on the risks to outcomes for inflation and growth. As any forecast, they are both model-dependent and sensitive to the incoming data. The Governing Council will receive fresh staff projections at the 10th March meeting, which will include all information which will have become available after the December meeting.”

–With assistance from James Hirai, Greg Ritchie and Jorge Valero.