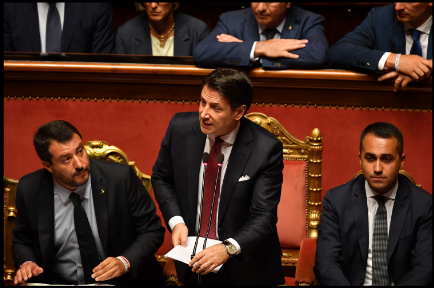 0
0
By John Follain and Alessandro Speciale
(Bloomberg) —
A common Euroskeptic cause is bringing Italy’s rival populists closer and threatening the country’s coalition government.

The issue at hand — a relatively minor reform of the European Union’s bailout fund — is usually the preserve of Brussels and treasury bureaucrats. But Matteo Salvini and Luigi Di Maio, who became bitter enemies this summer after their governing alliance fell apart, are both opposed to it.

Caught in the middle are Prime Minister Giuseppe Conte and the pro-EU Democratic Party, partners in the current government with Di Maio’s Five Star Movement. Conte is due to appear in parliament on Monday to respond to suggestions he explicitly violated lawmakers’ demands when he struck a deal on the EU fund at a summit last June.

“Conte has carried out an attack that harms Italians,” Salvini, head of the rightist League, told reporters last week, accusing the premier of agreeing to the changes in secret. “Let Salvini file a suit, and I’ll sue him for slander,” Conte retorted on a visit to Ghana.

Five Star leader Di Maio, who’s also foreign minister and is trying to reverse his party’s decline in the polls, has fueled tensions with his coalition partner by demanding changes to the European Stability Mechanism reform. Conte so far has stuck by Roberto Gualtieri, his finance minister and a former EU lawmaker for the Democrats who closely followed the negotiations in Brussels.

“Five Star is seeking a constructive approach and aims to find an agreement,” despite our opposition to the reform, the party said in a statement late Saturday. “Let’s get to work, improve this reform and make Europe respect us.”

EU leaders are poised to give a unanimous, final go-ahead to the reform of the ESM in Brussels on Dec. 12-13, but Italian media reported Saturday that Conte may ask to delay the approval and seek to introduce some changes. Gualtieri has prepared proposals for amendments to the reform draft that would allow it to pass without a delay and yet respect Di Maio’s call for changes, La Repubblica reported on Sunday.

Nicola Zingaretti, leader of Italy’s Democrats, called Di Maio’s request to change the reforms a “senseless challenge to Europe,” in comments cited by newspaper La Repubblica. Paolo Gentiloni, Italy’s former premier who is now the European commissioner for economic affairs, said there is no “technical or political reason to define the reform as a risk for Italy,” according to his interview with Corriere della Sera on Sunday.

The changes are set to give the ESM broader powers, including allowing it to serve as the lifeline for the currency bloc’s crisis fund for failing banks. Bureaucrats consider that generally less controversial than other potential tweaks to the framework of the euro area, such as a small common budget and joint insurance for bank deposits.

Leaders of the Democrats agree there is no need to ask the EU for further amendments to the measure and back the finance minister in his efforts to approve the existing deal, Minister of Culture Dario Franceschini said after a meeting on Sunday. PD officials said after the meeting that Italy will request any delay.

Italian opponents of ESM reform have seized upon the apparent coldness toward some parts of it by leading technocrats including Ignazio Visco, governor of the Bank of Italy, and Maria Cannata, the former head of the debt agency.

Among the items under scrutiny are norms that might make it theoretically easier to restructure Italy’s public debt, Europe’s largest, spooking investors and potentially pushing yields higher. Both Visco and Cannata have clarified that they support the final version of the ESM reform.

The debate has ballooned into all-out criticism of the ESM and of its procedures, set up by euro-area countries in 2012 after the years-long sovereign debt crisis to bail out countries in exchange for strict reforms.

“We have sparked a debate on the ESM. Finally Italians know something about it, and only thanks to the League,” Salvini said on Saturday. “It’s good that Di Maio finally woke up to it; we count on the coherence of Five Star and of some of the Democrats. Conte, on the other hand, has long stopped defending Italy’s national interests.”