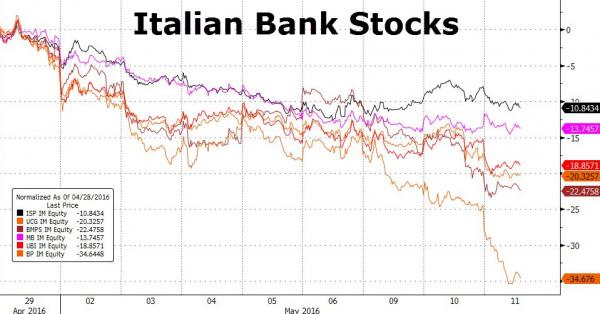 Italian Banks Are Crashing (Again) After Bad-Loan Writedowns Soar.Banco Popolare is dragging the rest of the Italian banking system drastically lower today after a“susprise” Q1 loss driven by soaring bad loan writedowns. Banco Popolare is down 14% on the day (25% in a week) to a record low, as Reuters reports the bank was forced to admit the reality of its bad loans by the European Central Bank as a condition for approving a planned merger with Banca Popolare di Milano that will create Italy’s third-biggest banking group.

A week in the life of Italian banks… bloodbath..

As Reuters notes, Italian banks have lost nearly 40 percent of their market value so far this year, weighed down by concerns they could need additional capital to shoulder losses from sales of bad loans that rose to 360 billion euros ($410 billion) during a long recession.

A share rebound triggered by the hasty creation last month of the fund intended to inject capital into weaker lenders and buy their bad loans proved short-lived.

Banco Popolare said late on Tuesday that it had written down loans for 684 million euros in the first quarter, nearly four times more than in the same period of 2015, posting a net loss of 314 million euros for the first three months.

CEO Pierfrancesco Saviotti told an analyst call that the loan writedowns were thefirst step towards selling chunks of bad loans and that it would book further provisions this year.

He said the ECB wanted provisions to cover 62 percent of the most troubled loans up from a 60 percent coverage ratio the bank reached in the first quarter.

Bankers say other Italian banks are likely to follow in the steps of Banco Popolare and raise cash to make up for loan losses.

Loans to insolvent borrowers are valued on average at around 40 percent of their nominal value on Italian banks’ balance sheets but market prices for these assets reach at most 30-35 cents on the dollar when the loan is backed by a good-quality property.