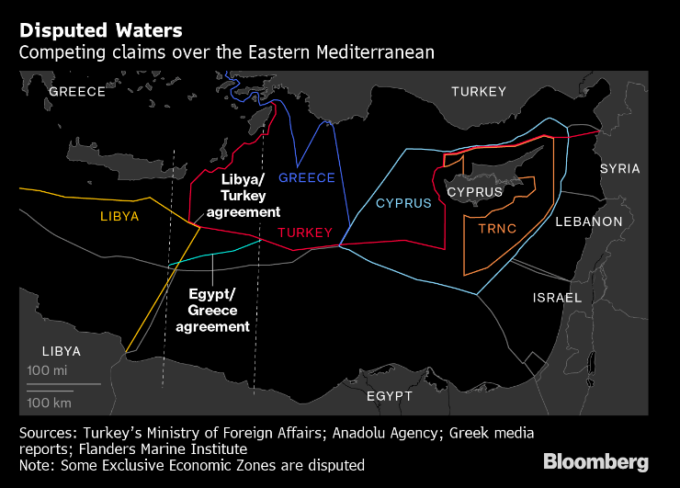 0
0
(Bloomberg) —
Turkey said it wouldn’t curtail its offshore explorations as a precondition to restart negotiations with Greece, throwing into question a German-led effort to defuse tensions in the eastern Mediterranean.“It’s impossible for us to accept all the conditions set by Greece for a good dialog,” Turkish Foreign Minister Mevlut Cavusoglu said on Tuesday in a joint press conference with his German counterpart Heiko Maas. “We are ready to enter talks without preconditions, but if one party starts imposing conditions, we have many of those to list ourselves.”

Maas traveled to Athens and Ankara on Tuesday in an effort to put an end to the escalating conflict over the NATO allies’ competing maritime claims. Talks collapsed earlier this month after Athens announced a maritime delimitation agreement with Egypt on Aug. 6, similar to a Turkey-Libya deal in December.The disputed region in the Mediterranean Sea has become an energy hot spot with big natural gas finds for Cyprus, Israel and Egypt in recent years. Turkey’s push to secure a share of the resources has deepened strains between the historic rivals.

“The current situation in the eastern Mediterranean is playing with fire, with any small spark potentially leading to catastrophe,” Maas told reporters in Athens earlier in the day. “What we need immediately are signals of de-escalation and a readiness for dialog.”

Greece on Monday began joint military exercises with the U.S. in an area that partially overlapped with the expected location of a Turkish survey ship, which Ankara had announced would explore that area until Aug. 27, three days longer than had been originally planned.

“Greece has shown that it’s ready for dialog, but not amid challenges and as its sovereign rights are being violated,” Greek Foreign Minister Nikolaos Dendias said, adding that he expects a possible list of sanctions against Turkey to be presented at an EU meeting later this week.

EU foreign ministers will meet in Berlin this week to discuss “our relationship with Turkey, and Greece’s voice will have special weight,” Maas said.

Greece says that islands must be taken into account in delineating a country’s continental shelf, in line with the United Nations Law of the Sea, which Turkey has not signed.

Ankara argues it should be measured from the mainland, and that the area south of the Greek island of Kastellorizo — just a few kilometers off Turkey’s southern coast — therefore falls within its exclusive zone.

Turkey is also at loggerheads with Cyprus over offshore gas reserves around the island, where the Republic of Cyprus is an EU member state and officially has sovereignty over the entire island.

But the island has been effectively divided into two since Turkey’s military captured the northern third in 1974, following a coup attempt in which a military junta in Athens sought to unite Cyprus with Greece. The Turkish minority’s self-proclaimed state in the north, recognized only by Ankara, also claims rights to any energy resources discovered off its coast.