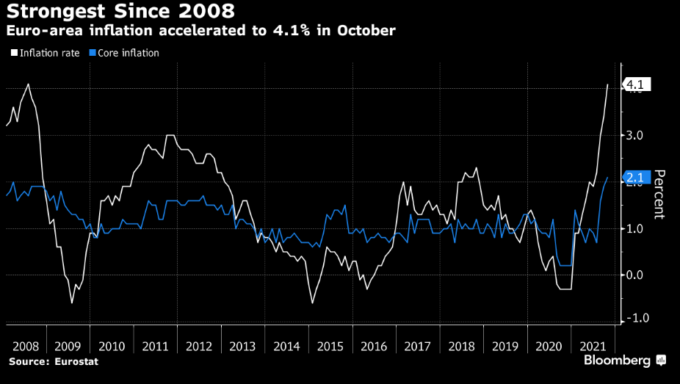 (Bloomberg) — Euro-area inflation accelerated more than expected to breach 4% for only the second time ever, adding to the European Central Bank’s challenge in battling increasingly aggressive market bets for interest-rate hikes.

Consumer prices rose 4.1% in October, compared with the median of economist estimates at 3.7%, according to figures released by Eurostat on Friday. A measure stripping out volatile components such as food and energy climbed to 2.1%, a rate not seen in nearly two decades.

On the eve of the data, ECB President Christine Lagarde attempted to pushed back on investor bets that her institution will have to raise interest rates next year, declaring such pricing at odds with its own analysis and policy guidance.

That left investors unimpressed. On Friday, they started to price in 20-basis points of rate hikes by October 2022, even sooner than before Lagarde tried to convince them that their expectations are off the mark.

“Without a doubt, investors have a different take on inflation to the ECB,” said Rishi Mishra, an analyst at Futures First.
Lagarde acknowledged that faster price increases will stick around for longer than the ECB previously anticipated, but also stuck to the view that it will ease through 2022.

Her attempt to counter investor speculation stopped short of saying markets are wrong to bet on rate hikes next year. That reflected an agreement among Governing Council members that such a move could backfire, officials familiar with the matter said.

Based on market pricing, investors are expecting the ECB to raise borrowing costs for the first time in more than a decade to bring the deposit rate to minus 0.3% within a year.

The shift in markets comes amid a global inflation surge that’s seen some central banks — including the Bank of England and the Bank of Canada — shift tack already.

Businesses are struggling to deal with the fraying of global supply chains, which has caused the costs of parts, raw materials and shipping to soar. Energy prices in the euro area, meanwhile, rose 23.5% in October, up from 17.6% a month earlier, amid a natural-gas crunch.
Anticipation of higher borrowing costs is also being felt in European bond markets. The 10-year yields on Italian and Greek debt — often regarded as the riskiest in the region — jumped 22 basis points and 11 basis points, respectively, to 1.29% and 1.17%. That’s pushed Italy’s benchmark borrowing costs to the highest since July last year.
Professional forecasters polled by the ECB also ramped up their inflation outlook for the period through 2023, though they continue to see a sharp slowdown in 2022 from the current level, according to report on Friday. The respondents expect price growth of 1.9% in 2022 and 1.7% in 2023, below the ECB’s 2% target.