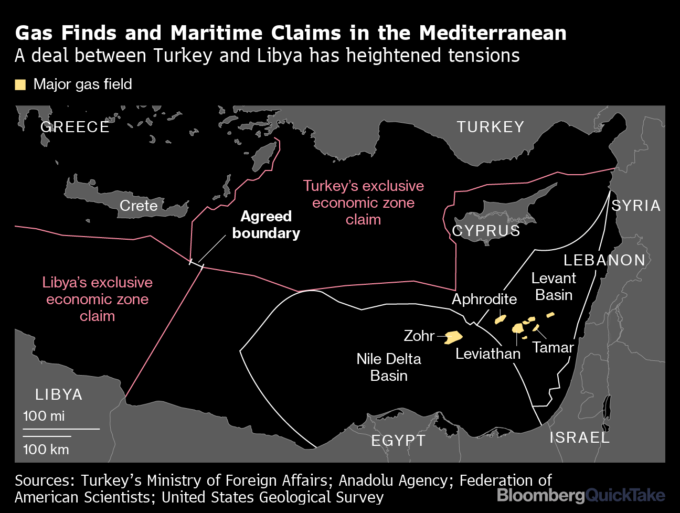 Erdogan’s remarks underlined Turkey’s determination to press its claims in contested waters of the energy-rich eastern Mediterranean, where European nations, Egypt and Israel have built a forum to promote their interests. Turkey insists it has rights to energy finds there due to its claims to Cyprus’s north, which it seized in 1974. Greece, Cyprus and the EU oppose Ankara’s drilling operations within the island’s exclusive economic zone.

Tensions over the conflicting claims have escalated since Turkey and Libya signed a contentious agreement in November that delineates maritime borders and affirms claims of sovereignty over areas of the Mediterranean. Turkey’s demands could make it more difficult and costly to build a planned natural-gas pipeline that could link the eastern Mediterranean basin with European markets through Cyprus, Greece and Italy.

“From now on, it is not legally possible to carry out any exploration activity or construction of a pipeline in areas between Turkey and Libya without the permission of both countries,” Erdogan told a televised conference in Ankara. “We will issue licenses for these areas and start exploration work in 2020.”

Greece, Cyprus and Egypt see the deal with Libya as a brazen Turkish bid for dominance in the contested waters. Libya is also in conflict with Greece over off-shore exploration licenses Athens issued for waters south of Crete, which is located between Turkey and Libya.

Turkey extracted the maritime agreement from Libya’s internationally recognized government in exchange for military assistance in the North African nation’s civil war. Ankara and Moscow are now trying to bring the warring sides to a truce, which would also protect the accord.

The eastern Mediterranean has been one of the world’s most prolific spots for major gas discoveries during the past decade. Noble Energy Inc. found the Leviathan gas field in Israeli waters in 2010 and Italy’s Eni SpA discovered the giant Zohr deposit off the Egyptian coast in 2015. Exxon made a discovery off the southwest coast of Cyprus last year.

Turkish drilling ships are currently operating off Cyprus in waters declared by Turkey as its own economic exclusive zone, under agreements with the northern Turkish Cypriot state, which is recognized only by Turkey. The EU is weighing sanctions against Turkey over its oil and natural-gas exploration off Cyprus, and Cyprus wants the International Court of Justice to resolve its dispute with Turkey.