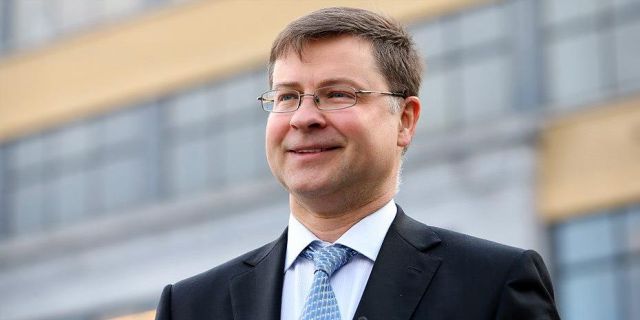 The final agreement on Greece’s exit from the financial assistance programme, expected to be concluded by the Eurogroup in June, will also include the debt issue, Vice-President of the European Commission Valdis Dombrovskis said on Thursday, addressing the European Parliament Committee on Economic and Monetary Affairs.

Vice-president of the European Parliament and SYRIZA MEP Dimitris Papadimoulis had asked Dombrovskis about the timetable for completing the programme and whether this includes the debt. He also asked how the Commission intends to work in order to bridge the differences between the IMF and the eurozone so as not to cause delays for Greece. The MEP stressed the need to implement the agreement already reached on the successful completion of the programme, including the strategy for growth, debt and post-programme surveillance.

“The commitment of all sides to the successful conclusion of the programme is clear. There are still some prior actions and other issues to be discussed, including debt measures. What I meant was that it would be completed in the coming months, namely in May or June. The Commission is working for this and it is feasible on the basis of Eurogroup decisions,” Dombrovskis said. He added that this was a critical time for these decisions and that Greece, on its part, had met and surpassed the targets for the previous year, while negotiations for the latest review have just begun in Athens.

Regarding the IMF, he noted that “we are working constructively”, and although the IMF has not participated with funds the third programme, it is participating in the missions as normal. “We are discussing what kind of cooperation or commitment we will be able to achieve,” he concluded.