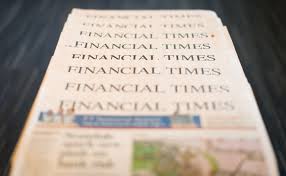 Constructive analysis of money printing is better than unthinking dismissal.The debate about “helicopter drops” — the policy by which the central bank creates money and gives it to someone to spend — has moved into the mainstream. Moved back, we should say, because that’s where it once belonged. As Ben Bernanke, former Federal Reserve chief, reflects on his blog, it was Milton Friedman, the doyen of midcentury free-market economics in the US, who most famously contemplated the policy.

Nevertheless, Bernanke unwittingly illustrates how far further serious economists still have to go in thinking about helicopter drops. He joins many others in a tendency to suggest that any form of helicopter money is “really” money-financed fiscal policy. By way of definition, this may be true — any allocation of new money could be done as an economically equivalent allocation from the government budget, financed by money printing. But even conventional monetary policy could presumably be carried out as a fiscal policy (a combination of tax and subsidy) that influences short-term interest rates, with the expense covered by the central bank.

It is more helpful to call policies involving the government budget fiscal policy and policies involving central bank money monetary policy. That avoids collapsing important distinctions of which I want to mention two: to whom a helicopter drop is structured, and how, operationally, the money is actually transmitted to the beneficiaries.

[expander_maker more=”Διαβάστε περισσότερα” less=”Διαβάστε λιγότερα”]An op-ed in the FT by Shahin Vallée makes the very important and under-appreciated point that there is a choice to be made about whom the helicopter drop should target, and that how this choice is made matters for economic and political economy reasons. Vallée rightly distinguishes between three targets: the government, households and the banking system. We could, for completeness, add the non-financial private sector, that is to say businesses producing goods and services in the “real economy”.

There are two dimensions along which one could rank these options — their effectiveness, in terms of how likely a given amount of helicopter money is likely to boost aggregate demand; and their feasibility in terms of political economy. Vallée seems right to suggest that these are inversely related: channeling helicopter money to banks (or businesses) is more covert and therefore easier for central banks to contemplate and accomplish; funding governments or households is more flagrant and therefore less likely.

But banks and businesses are already insufficiently willing to either lend or invest despite record low funding costs. The same is strangely true for governments. By far the biggest bang for the helicopter buck can be expected from a money drop to households. Given that the balance sheet expansion from most central banks asset purchase programmes amounts to some 20-30 per cent of GDP, it would not be surprising if giving that money straight to households instead would have created enough extra spending to eliminate the gap between where economies are and where they could be.

But whoever is targeted as a beneficiary, the “engineering” question remains. How does one actually go about getting newly printed central bank money into the pockets of people (or governments or banks or businesses)? The conventional image is, thanks to Friedman, the literal helicopter drop of cash; or the electronic version which Bernanke describes, namely a credit to an electronic bank account. He describes how the Fed could do this for the US Treasury; in most places, however, this technique is either explicitly outlawed or politically constrained to an extreme degree. Not so with helicopter drops to households — but it would be a challenge to set up bank accounts for every household at the Fed. (Robin Wigglesworth’s most recent round-up of helicopter drop research links to information about the legality in different jurisdictions).

But there are other ways to execute helicopter drops, passing legal muster and possibly less exposed politically. They exploit the fact that central banks are banks; that is to say, they engage in lending and deposit-taking. Eric Lonergan has explored in some detail two ways in which these activities lend themselves to grants of central bank money. One way is to flip the interest rate spread on lending and deposit-taking, which creates a gift to banks. Another is to issue perpetual zero-rate loans.

The two dimensions of analysis — who to send the money to and how to get it to them — are intertwined. For in their simplest forms, the helicopter methods mentioned in the previous paragraph favour banking institutions. But surely central banks can use banks as intermediaries for similar helicopter drops to households. Brad DeLong has an overly clever recipe for how this could be done, of which the first step is: “Incorporate — for free — everybody with a Social Security number as a bank holding company.”

But as Lonergan suggests, there is no need to be so creative. The European Central Bank already presents a model for how favourable terms are offered to banks on the condition that they lend to businesses or households (so does the Bank of England with its Funding for Lending programme). So a central bank could issue perpetual zero-rate (or negative-rate) loans to banks insofar as banks extend such loans to households, up to a limit. It could also offer deposit facilities tied to extending similar deposit terms to households.

In other words, much as in ordinary monetary policy, central banks can use the banking system as their “transmission mechanism” for helicopter drops to households, without involving fiscal policymakers at all. In fact doing so might lead to banks playing a more unambiguously useful social function than anything else they do.

The New Yorker blog profiles Wolfgang Tillmans, the Turner Prize-winning photographer behind an artistic poster campaign against Brexit. The campaign — including the admonition “Don’t come to Glastonbury without having used your postal vote!” — would seem to matter given young voters’ combination of very high support for remaining in the EU and typically low election turnout.

In the more mundane precincts of Brexit analysis, the OECD has become the latest heavy-hitting economic organisation to offer an opinion. It estimates that the UK would face heavy losses if it leaves the EU. That leaves only one small group of economistsarguing that Brexit would be beneficial in an economic sense.