Greek Bonds May Give Italian Peers a Run for Their Money 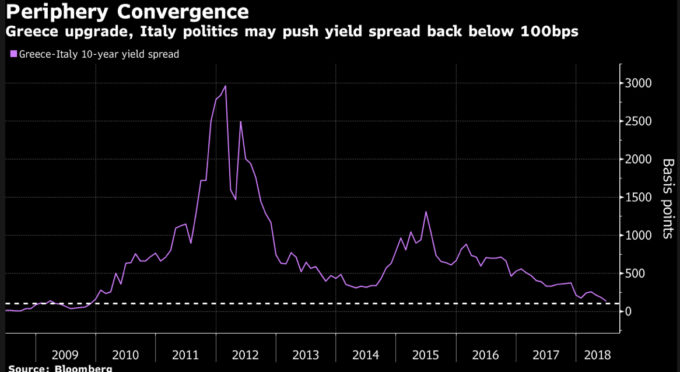 Greek Bonds May Give Italian Peers a Run for Their Money

Greece is back in the spotlight after S&P raised the nation’s credit rating by one level to B+ late last night. Considering one big concern over the Greek crisis was that “Grexit” could pave the way for “Italexit,” it’s an interesting juxtaposition with Italy’s current situation — and one that could see the two countries’ 10-year yields converge closer than they have for most of the past decade

Lingering euroskepticism in the Italian government is likely to keep upward pressure on the country’s 10-year yields, which stand ~130bps below their Greek peers.

Meanwhile, Greek yields stand to get extra downward momentum if other ratings companies follow S&P. Portugal, which got upgraded by S&P in September 2017 and Fitch in December later that year, saw its 10-year yields fall more than 100bps within six months of the first ratings action.

Even if Greek yields only see half of that move, and assuming Italian yields hold steady, we’d still be looking at a sub-100bps spread, which hasn’t been seen since November 2009.