This Private Island Hotel Has Only One Suite 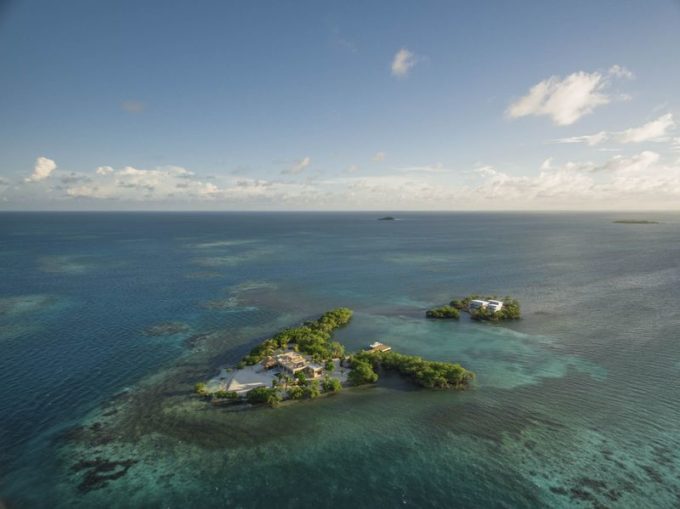 Fitness executive Jim Worthington had one goal for the luxury trip he was planning to celebrate the birthday of his girlfriend, Kim Levins: privacy. “I wanted to be 100 percent away from everybody,” he says from his office in Bucks County, Pa. “It was her 30th birthday, and I didn’t want to share it with anybody but her.”

So he booked the couple into Gladden Private Island, a tiny hotel off the coast of Belize that opened in December. It consists of a single two-bedroom villa. The island “is less than an acre. You could walk from one tip to the other, and it would take less than 30 seconds,” he says, laughing. “It was like being Robinson Crusoe—you have no idea the staff is even there.”

He and Levins spent their days enjoying the solitude, sitting at the edge of the water for four or five hours straight, saying perhaps three words.

“The beauty of where you are is unbelievable,” Worthington says. Indeed, the two were so impressed that they’re planning to make the island a regular vacation spot, taking a week to decompress there every 18 months or so.

It might sound like a risky proposition: rather than a vacation villa, a personal hotel with a full cadre of staff to cater to a couple’s every whim (from $2,950 per night for two, all-inclusive). But this is the hottest new niche in high-end travel—not a penthouse suite but an entire island just for you.

Gladden is the brainchild of Chris Krolow, the host of HGTV’s Island Hunters, who’s spent the past 20 years selling and leasing private islands. “It’s my baby,” he says. The idea was simple: Create the ultimate couples-only (make that: couple-only) hotel, a luxe hideaway for barefoot sojourners at which all evidence of other humans is concealed.

Set on a pair of mangrove-fringed islands a few miles off the southern coast of Belize, Gladden is accessible from the capital, Belize City, itself a nonstop flight from several hubs in North America. From there it’s a 30-minute helicopter transfer to the resort, making Gladden workable as a long weekend getaway.

The setting is superb. The coast of this Central American nation is fringed with a low-lying archipelago of more than 400 atolls set in crystal blue waters reminiscent of the Maldives or the South Pacific.

“This part of Belize is insanely beautiful. It’s like a jewelry box of blue all the way around,” Krolow says. “The color, the clarity of the water—it’s like nowhere on the planet.”

Having two islands is key to pulling off the concept, he says. It allows him to keep staff accommodations, buildings for generators, and other infrastructure on the second, smaller island, so guests can feel completely alone. The employees consist of two couples who tag-team on everything from cooking (one of the women is a certified Le Cordon Bleu chef) to spa treatments (massages are offered, gratis, as often as guests wish). And to prevent visitors from getting startled by the staff, there are small warning lights in every room of the hotel that flash red when support team members are venturing across from their standalone islet.

Although Gladden has two bedrooms and can accommodate four guests, 70 percent of Krolow’s bookings have come from couples like Worthington and Levins who are often celebrating birthdays or anniversaries. In an overconnected world, seclusion has become even more of a benchmark of luxury.

Among other private-island resorts is Little Peter Oasis ($4,995 for a four-night package), also in Belize, which has space for four guests in a two-bedroom villa built over the edge of a private lagoon protected by a reef. It’s a place where you can channel your inner Brooke Shields, with or without a bikini.

In the Maldives, Cheval Blanc Randheli, the tropical offshoot of French resort Courchevel 1850, has 45 traditional villas on one site but also operates a three-bedroom “owner’s villa” (price upon request) on a nearby private island only a five-minute sail away. Thirty staff are available to either pamper you or ignore you, whichever your preference.

The 14-acre Dolphin Island in Fiji ($2,790 for two nights) sleeps eight, and a local fisherman will stop by every day to drop off his freshest catch for the on-site chef to prepare. Satellite Island ($2,730 for four people for two nights) is a rugged, high-end hideaway with a lodge for one family off the coast of Tasmania. It’s ideal for outdoors types keen to hike in isolation or swim in crisp, clear waters. In northeast Ireland, the lakeside Trinity Island Lodge is a converted granary that once served the now ruined Trinity Abbey in nearby Cavan. Starting from $1,297 per week for six, it features its own sauna and game room, as well as miles of forest trails.

According to Chris Laugsch, who runs the high-end villa rental agency Welcome Beyond, “People have seen and done the five-star hotels—that’s the usual stuff. More and more, people really want to disconnect during their holidays, and what better way to do that than on a completely private island?”

Eager to meet the demand, he’s just added to his portfolio an entirely private island, an eight-person hideaway off Nicaragua’s coast that’s fully staffed, much like Gladden.

With the growing trend clearly meeting a need (or at least a strong desire), it’s no wonder that Gladden is sold out for much of next year—or that Krolow is planning a sister property on a similar island in nearby Nicaragua. But he isn’t sure he’ll ever be able to indulge his ultimate goal, which he mulled before beginning construction on Gladden.

“I wanted to take it one step further and make it for one person,” he says. “But not enough people travel alone.”