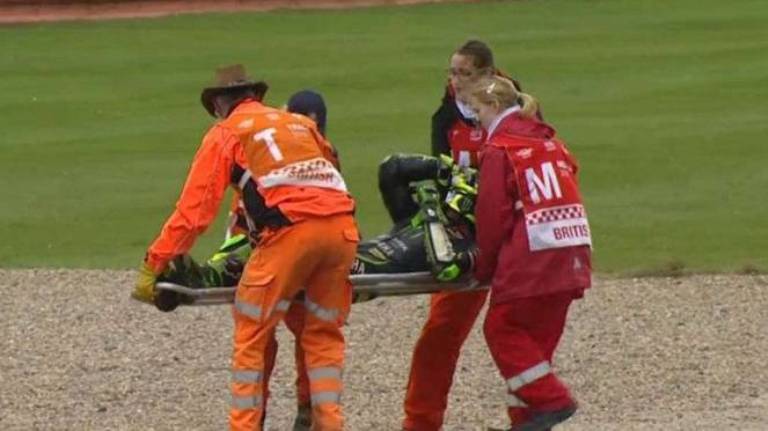 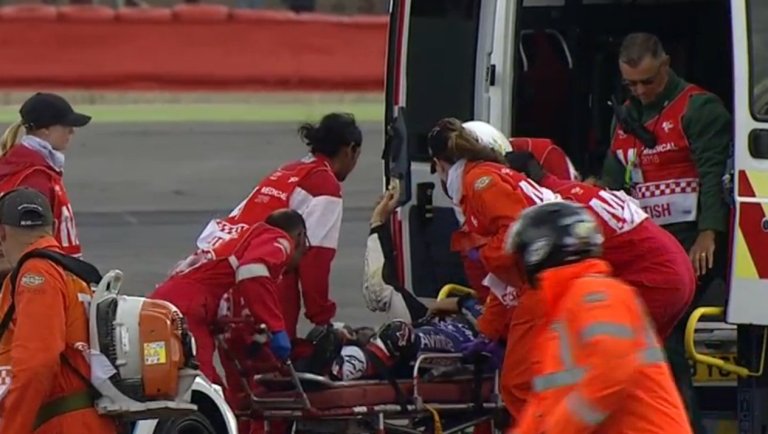 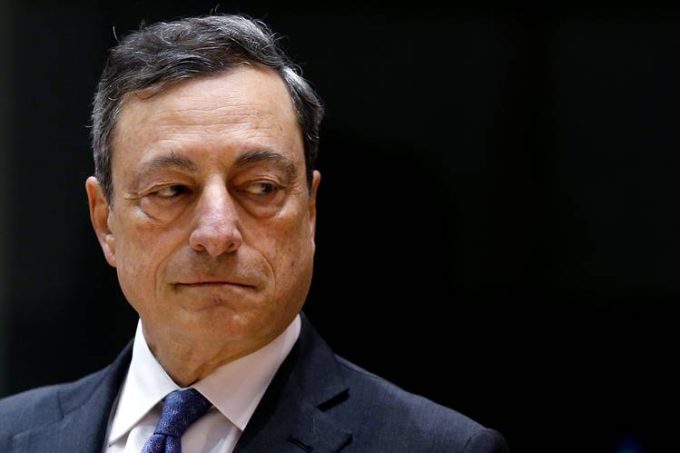 Draghi Nears His QE3 as ECB Seen Relying on Ever-More Stimulus.If at first you don’t succeed, extend, and then extend again.

With euro-area inflation stuck near zero for almost two years and Brexit now threatening to undercut the region’s recovery, economists see European Central Bank President Mario Draghi as highly likely to lengthen quantitative easing for a second time. That would take the asset-buying program beyond its current end-date of March 2017 and above the target of 1.7 trillion euros ($1.9 trillion).

More than 80 percent of economists in a Bloomberg survey expect such a decision, with a similar share predicting the ECB will tweak its purchasing rules to avoid running out of securities to buy. Almost half of respondents foresee action on Thursday, when the Governing Council sets policy in Frankfurt, with almost all the rest predicting an announcement at the October or December meetings.

Draghi’s position is reminiscent of the one Ben Bernanke faced in 2012 when the then-chair of the U.S. Federal Reserve added his third installment of asset purchases, so-called QE3, and promised to keep going as long as necessary. The ECB head has repeatedly said officials will keep up their stimulus until they see a sustained adjustment in the path of inflation, and the signs are that’ll take more than another six months.
“Conditions to withdraw monetary stimulus will likely not be met next March,” said Kristian Toedtmann, an economist at DekaBank in Frankfurt. “There is no point in postponing this decision.”
Inflation in the 19-nation euro area was 0.2 percent in August, unchanged from July, and core inflation weakened. Fresh ECB projections are scheduled to be released on Sept. 8., an event that has often underpinned a decision to change policy.

The more the ECB buys, the greater the risk that a scarcity of assets turns into a shortage. To avoid that, economists see it as almost inevitable that a QE extension would have to be accompanied by a change in the central bank’s self-imposed rules on purchases. That’s a potentially tricky debate in the Governing Council, which set the parameters to avoid concerns over market distortion, monetary financing and risk-sharing.
First among those tweaks would be to increase the maximum share of each bond issue that the ECB can buy, according to the survey. Second would be to drop the rule that assets are ineligible if they have a yield below the deposit rate, currently minus 0.4 percent. A minority says the central bank could move away from linking national QE allocations to the size of each economy, referred to as using the “capital key.”

“Removing the deposit-rate floor would be a powerful move and also politically less tricky than deviating from the capital key,” said Holger Sandte, chief European analyst at Nordea Markets in Copenhagen. “The ECB will have to change the QE parameters before long, but they will probably wait until December before taking some of the council members deeper into their discomfort zone.”
The great unknown in the ECB’s policy deliberations is the impact of the U.K.’s decision to leave the European Union. Despite grim predictions, there has so far been little observable negative impact on either the euro-area economy or Britain, its biggest trading partner.
The survey signals little in the way of revisions to the previous round of ECB economic projections, apart from the 2017 figure for gross domestic product growth. That estimate currently stands at 1.7 percent, and 37 of 50 economists said it would be cut.
The ECB’s current inflation forecast doesn’t see price growth returning to target before 2018. That means ending QE — economists expect a Fed-style tapering — is probably a long way off.

“My base case is that they will extend QE by six months in September,” said Claus Vistesen, chief euro-zone economist at Pantheon Macroeconomics Ltd. in Newcastle, England. “Anything else would be a disappointment, and likely cause a hiccup in markets.” 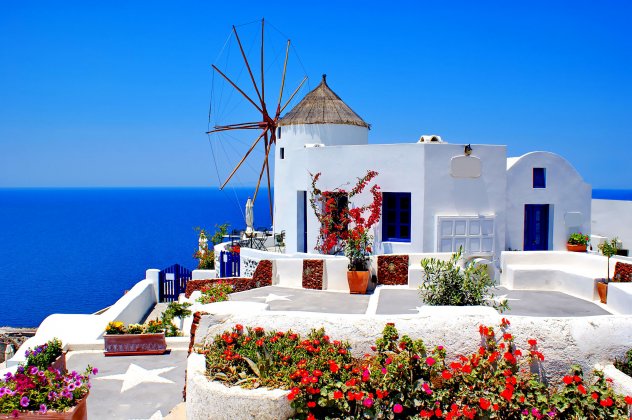 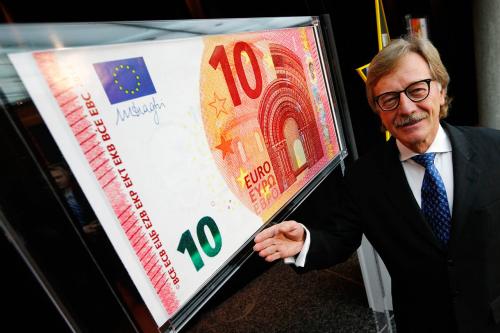 ECB Board Member Lashes Out At Central Banking: Ignore “Mathematical Models”, Focus On Reality.At first (literally the day the Fed announced QE1) it was just “tinfoil fringe blogs” who predicted the failure of the central bank’s attempt to boost the economy by printing money, instead warning that all the Fed would do is unleash an unprecedented income and wealth divide that may culminate in civil war and hyperinflation. Then, gradually, analysts, pundits and even the mainstream press admitted the truth, i.e., that tin-foilers were right, and recently even the Fed’s own mouthpiece, Jon Hilsenrath, one day before the Jackson Hole meeting wrote that “Years of Fed Missteps Fueled Disillusion With the Economy and Washington“, an article which set the stage for the pivot to the US issuance of much more debt, because apparently $9 trillion in new debt under Obama is not considered enough “fiscal stimulus.”

However, with virtually everyone else now slamming central banks for fooling the world for the past 7 years that they knew what they were doing, now that even Yellen admitted she has no idea what will happen in just the next 3 years projecting a 70% confidence interval of the Fed Funds rate of between 0% and 5% by the end of 2018 (we wonder what a 100% confidence would look like)…

.. overnight central bankers themselves attacked central bank policies, when ECB board member Yves Mersch warned on Saturday against using “extreme [policy] measures [with] unacceptable side effects” to shore up the eurozone’s weak economy, which he said could undermine trust in the single currency, a warning aimed squarely at Mario Draghi.

Mersch’s comments, reported first by the WSJ, come amid a growing debate over whether central banks in Europe and Japan should bolster economic growth by turning to even more tools such as “helicopter money.” Even more ludicrous, as we reported yesterday, Reuters already lobbed a tentative trial balloon, hinting that the ECB may be “forced” to buy ETFs and equities having virtually run out of bonds to monetize. Still, despite all ongoing ECB deflationary counter-measures, eurozone inflation was just 0.2% in August, far below the ECB’s near-2% target. Investors are increasingly concerned that the central bank is running out of tools.

Surprisingly, at this point Mersch joined the Weidmann bandwagon, and cautioned against “academic proposals [that] seem to prefer sophisticated models to social psychology.”

Or in other words, for the first time, a central banker has suggested that broken (which is a far more accurate definition that sophisticated) financial models should be ignored when dealing with reality.

“We cannot fulfill our mandate with mathematical equations, but only with instruments that maintain trust in the currency,” Mersch said at an annual economic forum on the shores of Lake Como, Italy.

Expanding his tongue in cheek criticism of Mario Draghi’s relentless crusade to hurt the euro and reflate asset prices at all costs, Mersch then said that “extreme measures or legal violations of our mandate aren’t among those instruments.”

While Mario Draghi has described “helicopter money” as an interesting academic concept, he has said repeatedly that policy makers haven’t discussed the idea at ECB meetings. Of course, this will soon change, and Mersch’s warnings will be ignored, until such time as the “trust in the currency” is finally lost.

The ECB’s 25-member governing council will hold its next rate-setting meeting on Wednesday and Thursday in Frankfurt. With Mario Draghi already in process of nationalizing the sovereign and corporate bond markets, after the Reuters trial balloon, the central bank may “surprise” everyone and launch the outright buying of equities next.