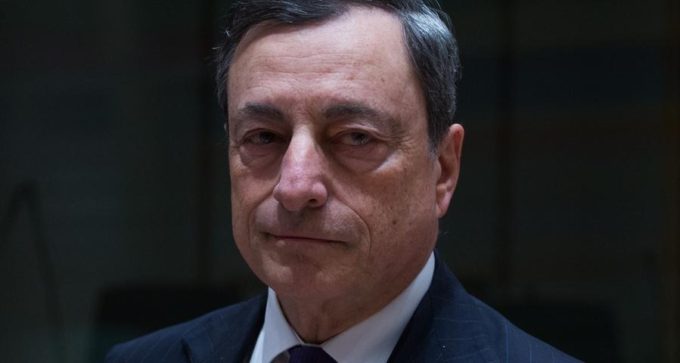 By Xiaoqing Pi(Bloomberg) —
The European Central Bank still intends to cap its bond-buying by year-end and leave room for an interest-rate increase late next year, even amid mounting signs that the euro-area economy is wilting under global pressures.The Frankfurt-based institution said it will buy 15 billion euros ($17 billion) of bonds a month through December, with a final decision to end the program contingent on incoming information. Policy makers reiterated that interest rates will remain at their present record lows “at least through the summer” of 2019.

Attention now turns to President Mario Draghi’s press briefing at 2:30 p.m. in Frankfurt, where he will explain the Governing Council’s decision.

A key point investors will focus on is the assessment of economic prospects. Since policy makers characterized risk to the outlook as “broadly balanced” six weeks ago, domestic momentum has weakened and uncertainty around global growth has increased.

A gauge for private-sector growth in the euro area slowed to the weakest since 2016 — a level IHS Markit said Wednesday “would historically be consistent with a bias toward loosening monetary policy.” Confidence in the region’s largest economy slid.

Draghi’s list of concerns is long. Underlying inflation continues to be muted, trade tensions between the U.S. and China are starting to take their toll on the Asian economy and export-focused companies in Europe and around the world, and risks of a disorderly Brexit are running high.

A standoff between the Italian government and the European Commission over the country’s budget probably also features prominently. The spread between Italian and German 10-year bonds is hovering near a five-year high, approaching levels seen as unsustainable for banks.

Moreover, global markets have tumbled this month. An equities rout wiped out U.S. gains for the year, and the Stoxx Europe 600 is down almost 8 percent this month.

Investors are also looking for information on whether the ECB will change its reinvestment policy once net purchases end.