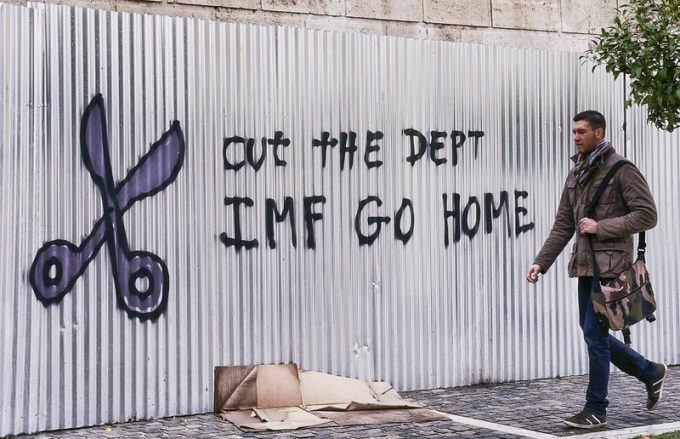 The IMF Needs to Stop Torturing Greece.Beware of Greeks bearing gifts,” wrote the ancient Roman poet Virgil. In the 21st century, it’s the Greeks who should have been more careful about accepting offerings — specifically from the International Monetary Fund, which is now torturing the country in a misguided effort to get its money back.

Greek officials have worked hard to shore up their economy and finances. From 2010 through 2016, the government achieved the all-but-impossible task of shrinking its primary budget deficit by nearly 18 percent of gross domestic product, and is finally in surplus. After a brutal contraction of almost 30 percent, the economy is exhibiting positive signs in almost every area — industrial production, new automobile registrations, construction permits, tourist arrivals.

The banking sector, too, has made great strides. After two full inspections of their loan books — first by BlackRock in 2013 and later by the European Central Bank’s Single Supervisory Mechanism — the banks have been fully recapitalized twice. They have bolstered their provisions against bad loans, and their capital ratios are now significantly higher than the European average, providing a buffer against any future losses.

Greece, however, still carries a heavy burden: the roughly 250 billion euros that the IMF and its European partners lent the country to save its economy and most likely the entire euro area. This stock of official bail-out debt remains due even though private creditors have been amply haircut, restructured and wiped out. In 2012, for example, the government’s private-sector bondholders were forced to accept a loss of nearly 80 percent. Greek bank shareholders have seen their investments wiped out twice in recapitalizations.

The IMF could write off its debt and lighten Greece’s burden. This would benefit the country’s long-term economic health, and therefore Europe’s, too. Instead, the fund is demanding further austerity measures and insisting on “structural” reforms of dubious value. By sticking to this economic ideology, it is neutering the nascent economic growth and stifling any hope of real prosperity.

The IMF came forward as Greece’s savior during Europe’s financial crisis, but now it looks more like a frenemy. Consider the history of the debt. When a country joins the IMF, it is assigned an initial “quota,” based primarily on its GDP. A member country can typically borrow up to 145 percent of its quota annually and up to 435 percent cumulatively — or possibly more in “exceptional circumstances.” These are essentially credit limits, designed to not overburden the borrower with debt. Yet amid the crisis, the IMF agreedto lend an eye-popping 3,212 percent of Greece’s quota. Together with loans from the fund’s European partners, Greece’s official-sector debt amounts to more than 135 percent of GDP.

The IMF knew perfectly well that its loans could never be repaid. I have heard this directly from officials involved in the process. All the participants at the time — including U.S. Treasury Secretary Tim Geithner, ECB President Jean-Claude Trichet and IMF Managing Director Dominique Strauss-Kahn — made a conscious and very political (not financial) decision to prevent the crisis from spreading and keep the euro area together. Without such an enormous loan, Greece would have certainly been forced to leave the currency union.

So what to do? Greece sorely needs to regain investor and consumer confidence today. For this to happen, the country’s official sector lenders need to write down the debt or convert it into equity, chalking it up to the cost of keeping the euro area together.

The IMF’s stance is preposterous. It is motivated by self-interest, rather than by what would be best for Greece. The fund has simultaneously tried to block Greece’s return to the capital markets and attempted to undermine Europe’s new banking union by demanding yet another recapitalization. Considering that the country — like all euro members — can’t achieve macroeconomic adjustment by devaluing its currency, extreme care must be taken. Consumer and investor confidence, not exports, will ultimately drive growth.

Lack of confidence is undermining the Greek economy. Sentiment indicators have remained in negative territory, even though industrial production has been growing since 2015. The gloom has prevented renascent growth from prompting a new cycle of investment, as it normally would. Without that positive feedback, growth can’t accelerate.

The banking system doesn’t need another recapitalization. Loans are best worked out by institutions that have a relationship with borrowers and can find solutions without creating unnecessary disruption. This is precisely how the U.S. went about restructuring troubled mortgages with its Home Affordable Refinance Program, which laid the foundation for an economic and housing recovery. This could be a model for Greece.

Greece has done its part, by pursuing legal reforms that provide banks with new tools to resolve troubled loans. But the IMF began undermining the new legislation even before it took effect, arguing that it would never work. This is counterproductive because it dissuades borrowers and lenders from cooperating to find solutions that make the debt burden manageable and ultimately allow businesses to return to growth. Backstabbing Greece as it tries to make progress is not responsible behavior.

Meanwhile, the negative effects of the IMF’s “plan” are easy to see: further erosion of investor confidence in Greece and an undermining of European banking regulators’ political independence. All parties need to focus on fostering stability and solvency, leaving past politics at the door. This is the missing ingredient which, when found, will bring the recovery that the Greek public has been waiting for.

Private investors have suffered. The Greek people have suffered mightily. Now the IMF has to do its part by writing off Greece’s debt, ceasing demands for another recapitalization and letting Europe’s leaders take charge.